A race report! I finally get to do a race report! I checked my history and it is almost a year to the DAY since my last one! Today I ran the Japan Day 4 miler with Nixta! 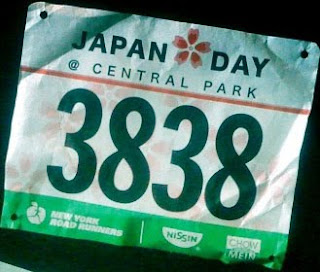 It does feel a little wrong that of all things, we are sponsored by MSG laden ramen noodles, but oh well. Lookit my race bib!

I've been having some aches and pains that could be from anything from speedwork, residual pain (my muscles that spent a year holding tight around that injury waking up again and going; 'OMG! We gotta protect this again!'), pain from orthotics that haven't been dialed into the 'sweet spot' yet, or....reinjury. I don't think it is the last option, but it is enough to make me want to be careful. I took 3 days off, alternated heat/ice/compression, did all my stretching and strength training and waited to see how I felt on Sunday morning. Which was 'good enough to run it like a training run', so I saddled up and led Nixta to the 5 train.

We caught a train as it entered Union Square, and once we sat down, we noticed the passengers were predominately runners. By the time we got to 103rd st, the car was PACKED with runners. I wish I had taken a picture! I will next time, because it really is a kick to see all the running nerds commute to the 'office'.

Got there a bit late, so I ditched Nick at the corrals while I combined a warm up jog with a run to get my bag checked before the time limit. I then found my corral and started my warm up stretches while I watched the chaos of runners v/s cyclists on the other side of the barrier. 5.500 runners were there, wandering around, trying to get to where they needed to be, which is OK, but we were blocking the road that the cyclists use. There were volunteers yelling at the runners to move to the side, but once you put people in a large group, they go retarded, so no one was listening, and the cyclists had to slow to a crawl to get through. Most looked annoyed, but would either slowly pedal through, or they unclipped and walked the 30 feet that was the most congested. Now that I can count myself among both groups, I felt sympathy for both sides. There was yelling, swearing, threats, eye rolling and general bitchitude from everyone, and I wished I could just give them all a 'time out' so they'd stop bringing me down on the day of my 2010 race debut!
Running nerds...cycling douches...I feel you both, but can't we all just get along?

So, announcements, national anthem and then the horn sounds and WHEEEEEE! I'm running a race again!

I kept this one around 8:35 avg, and apart from the weirdness of running on concrete again, as well as the stupid humidity and heat that made me want to die, I did ok. It was a sissy loop of CP; counter clockwise, using the transverses so no Harlem hills and the course lanes were pretty wide and easy to navigate. I took water at two stations (walking 30 secs at one) and other than some mildly sore groin muscles, hip flexors and butt, it was an OK run. I still had to do the negotiation dance with my brain/body, but I kept it steady-ish and finished just above my first 4 miler pace from last year. This was a slow training run for me. If I didn't have the old injury and the oppressive heat + humidity to deal with, I could've PR'd this bitch without sweating too hard. Nixta locked into a 7:30 pace and cruised it home, finishing in 29:57. We met afterwards for finisher bagels and a walk around the reservoir, then we got back on the 5 train to head home.

I have some soreness when I poke at the tendons in my groin area, but none when I walk, run or sit and as the day progresses, the soreness is going away. I'm going to take the week off from running, hit the R.I.C.E. + heat treatment, call the orthotic guy to discuss possible adjustments and just work on my swim stroke and weight training. Then we can see how I feel on Saturday for the Mini 10k. I can run it, I can skip it...whatevs. Right now, my focus is on my Triathlon debut at the NYRR Sprint Tri in August!
Posted by DMC at 6:00 PM