I heard about this when I read Kara Goucher's latest blog entry on Competitor. Apparently her husband is training through an injury on it.

I give you: The Elliptigo

I...don't know what to say.  I've always seen the elliptical machine as a training time-out;  it is for recovery work.  Yes, you can get a good work out on it, but...90% of the people who use it just don't.  People who talk on their cell phones during a workout use it.  It has a damn MAGAZINE RACK.  Its not a bad workout, but its fans have made it kind of...lame. 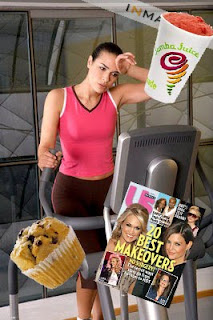 So the idea of bringing it out into the world as a bike/running hybrid sounds...good.  Ish.  Again, it really is a good workout when done correctly. Maybe this will take it back from the Juicy Track Suits who leave their muffin crumbs and Jamba Juice buckets in the cup holders for me to stare at while I try to get a few miles done without dying of boredom.  I wonder how it looks?  Hey, Dean Karnazes - show us how its done:

I....just don't know if I can get on board with this.  It is another way to get outside, and you get a better work out on varied terrain, but this just looks weird.  I kind of want to try it, but I think I'd be laughed out of Central Park on that thing.  Seriously, every tri, running and cycling club in the city would beat me up and take my lunch money.  I don't think even the recumbent bikers and running jugglers would hang out with me. 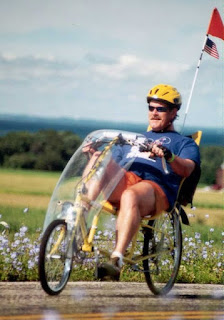 Me: 'Wanna do some hill repeats?' Recumbent: 'Is that a bike? WTF?' 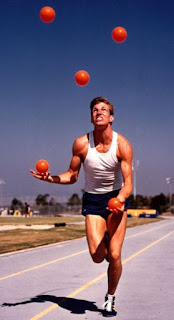 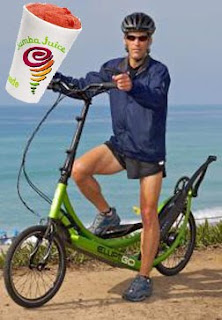 I guess we can only sit back and wait for the novelty to wear off.  Snowboarding was considered strange when it was first getting off the ground - many ski resorts wouldn't even allow boarders to use their slopes.  Barefoot runners were a fringe hippie group until a year ago, when this book brought it into the mainstream.  Marathon running only became popular in the 70's, and even then it was a very specific group of loners and misfits who were drawn to it.  Maybe the Elliptigo will make it through its growing pains and become a popular sport as well as an effective way to cross train.  Cycling managed to do it. 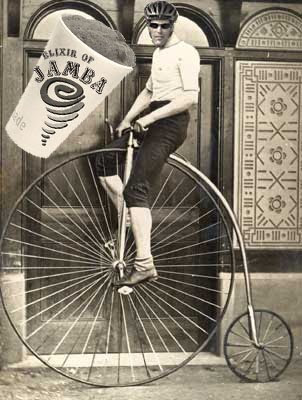