First 5 Miler Of the Year!

Today was an awesome 2fer; my longest run of the year (and in my new orthotics!), and I did it with a suprise last minute special guest...Nixta!

We met outside of my office at 6:00 and headed to the end of the bridle path under the Pine Bank bridge at west 62nd to start our loop.

The Boss (aka The Running Coach), told me to hit 45 minutes, so we decided to do a long bridle path loop up to the 102nd street transverse and back down the east side. Nixta was sweet to run slow enough for me to keep pace, so we had a nice chat;

'I think I started too fast.'

'This feels weird, I wonder if the injury is acting up again. Maybe I should stop.' 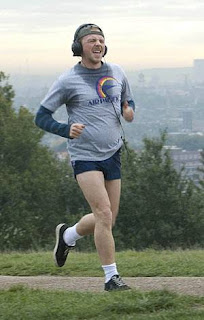 This was me today. Seriously. Coming back from a long injury is NOT pretty.


After a few miles I felt better, but it was an odd feeling to be running this long again. I kept thinking it was time for a sissy walk break, but I was able to keep going by using my old 'I'm in Super Mario Bros' trick; Pick a tree in the distance, keep running to it and get 100 points for not stopping. Pass that group of speed walkers, 300 points. One of these days-I'm going to find somewhere that will redeem all of the 'points' I've accumulated, but until then, I keep racking them up as a way to keep going when I want to stop.

I also found more stamina using my patented RUN RUN DMC hill training technique, but Nixta was not impressed. He's an idiot. Runners- the best way up a hill is to growl at it, say 'Screw you, hill!' and then charge it like Mel Gibson leading a pack of blue faced soccer hooligans in that ridiculous movie about never letting the Brits take your freedom. Now that i think about it, that's probably why Nixta doesn't like it, and hangs back when I do it. Runners- the best way to take out a British competitor is to shout 'Screw you, Limey!', and charge the hill. Seriously.

Nixta got tired of my nerdy crap at about mile 3.5, so he ran ahead as I battled it out with a body that was not happy at running for so long. I wanted to keep it at an 8:30 pace as long as I could, but the corporal rebellion was beginning. My cardio fitness had peaked and I was starting to feel like my lungs were going to burn out. I have yet to fully convert back to my runner's diet, so my run was putting some stress on the digestive process, and my entire GI system was unsure if it should keep working or reboot (note to self: bacon turkey club sandwich w/cheese and potato chips 2.5 hours before a run...not such a good idea). I spent about a quarter of a mile wondering who of those around me would come help me if I threw up. I have a lot of faith in the running community, I think I would've had no shortage of concerned running nerds making sure I was OK and then congratulating me on pushing past Mach 2 on my post injury puke barrier. I finally did need to walk it for about 30 seconds at mile 4, but I rallied quickly and finished 5.38 miles in 48:32. I hate that this is so hard for me. I'm used to blazing through a 10 mile run at this pace on a BAD day, but...baby steps. I'm getting back there. Slowly. A pretty solid effort for the first time I've taken it out of first gear post-injury.

Running with the orthotics was great, though I did get a blister on my right heel because I went too long too early in the breaking-in process. I think its going to be fine, but I need to walk around in those things a little more before my long run on Saturday. I changed into my Pumas for the walk home and it was INSANE how much different they felt after that run! It was like the (previously perfectly serviceable and comfortable for walking around town in) Dr. Scholls arch support in my left shoe was in BACKWARDS. Everything felt wrong, and I could feel my feet and ankles flopping around and rolling out like the Coach had been telling me. I thought he was exaggerating when he made those faces at my feet while I ran on the treadmill a few weeks ago, but...apparently not. My stride without the orthotics had more funky loose movement than a Soul Train dance line, and with the orthotics...steady, military precision. Look out races. Its about to get SERIOUS. My feet are NOT playing anymore. If these orthotics do what the Coach thinks they will, I am on my way to world domination. Or at least finally get down to the consistent 7 minute mile pace that I know I have in me.
Posted by DMC at 8:38 PM