So its been a while since I was given the go ahead to start running again, and all seems to be going well. My doc hooked me up with a new running coach and I now have the athletic micromanagement I so desperately crave. Every once in a while I will get extra sore muscles and go into a mini panic that I have to be talked out of: 'muscle pain is normal, you are starting from square one, trust the recovery plan'. Its hard to not go into a tailspin at every little ache or pain. After 8 months off, I'm wary of hurting myself again, but that's why I have the coach. Babysit me back to health, boss!

Before I got the coach on staff, I found a fellow runner (and increasingly awesome triathlete) who suffered from the same injury, probably caused by the same factors that took me down; overtraining, nutrition deficiencies and muscle imbalances (more on this later). We both had trouble getting a diagnosis and even more trouble admitting that maybe there was something really wrong, but Frayed Laces took it one step beyond and actually RAN (and finished) her first marathon on 2 full pubic rami fractures. You can read about her race, injury and recovery here.

I emailed her just before seeing my doctor to gauge whether my recovery aches and pains were similar to hers. She was super helpful and I felt much more confident in the way I had handled my time off and PT over the last 8 months. She also pointed out that if I got the OK to start running again, I needed to go slow for several months, as newly laid bone isn't strong enough to handle the impact of running. A slow buildup would help condition the bone and build the muscles in the hip area to help protect the old injury site while it healed. I was still nervous though. My last sports doc experience was pretty horrible, and I didn't want to hear another doctor tell me to give up.

Thankfully, the new doc shares my passion. He is apparently THE go-to endurance athlete doc in NYC, and when I finally saw him, he showed me all that beautiful new bone my hip was now sporting (still trying to get a copy of the xray film!), and told me to start training again, because he expected to see me at the starting line in November! After reading my MRI's we saw that I actually had TWO fractures (superior and inferior pubic rami), which is pretty common, but it was still a dick move for my old doc to not bother telling me. I told new doc about old doc and he kind of rolled his eyes and gave me a 'what a hater' look as he pitched the wonders of triathlons and how I needed to get going on my bike training soon!

He looked at my feet, had me do some single leg squats and a few resistance exercises, and told me three things; I had really high arches, weak hips and super tightly strung hamstrings and quads. The high arches mean I get less shock absorption on impact, so while I don't overstride, I'm getting a lot of pounding that can cause bone injuries. The weak hips mean that my knees are collapsing inwards, I'm not running from my core as much as I should be, which throws off my form, which causes a lot of pounding that can cause bone injuries (it also causes knee and IT band issues, which I was starting to have after the BK 1/2). The tight muscles make it harder to recover from a run, and will eventually pull too much at the bone and ligaments...which can lead to bone AND soft tissue injuries. Even if I had kept my training volume low and was nutritionally tip top, the stage was set for this injury. 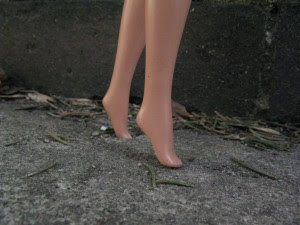 Barbie Feet. Not so cute for runners

So then I saw the coach. He took one look at my feet/hips and told me to get to the gym for strength training and get into some custom orthotics. Like now. So I got fitted and until I get them back...I'll be running slowwwwwly.

My runs are short, they are few, but check out some of the views I've been enjoying! 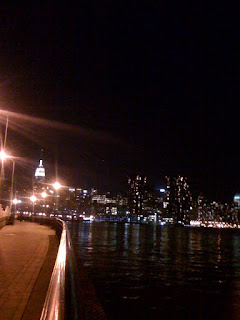 My first run! Behold the glory of the East River Promenade 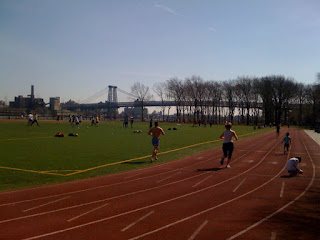 The East River Track has views of Williamsburg Bridge and the Domino Sugar Factory! 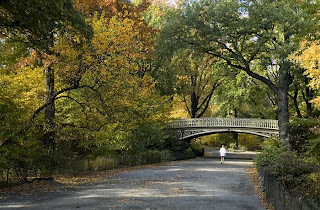 I'm running, I'm biking, I'm swimming, and I'm back on the blogging! More (belated) updates coming throughout the week!
Posted by DMC at 11:56 PM