*Or walk. Whatevs. Just do it for Haiti.

I have been status: Injured for almost 8 months. It was hard to adjust to not running, but as time went on I was able to do more and more (like swimming and the eliptical) and while my cardio fitness options were limited and I had gained a few pounds, I was able to keep a level of fitness and build some strength while I was waiting this stress fracture out. The worst part of being status: Injured is that you are in runners social siberia. You can't go to group runs, you can't race, and eventually you won't be seeing your running buddies as often. It is NOT personal, you just aren't on the radar if you can't keep up. Every once in a while I would make an effort to show my face at functions and races, and that helped me feel less isolated, but honestly, unless you can log the miles, you are going to be benched, so just focus on your recovery and know that you won't be injured forever and that this is a good time to put in some quality time with the non running friends that you weren't seeing much of during your training. Luckily for me, most of my downtime was during the off season, but when I started seeing facebook status updates from friends about running late winter races, it started to get to me.

Thank god the Run For Haiti came. I had convinced Nixta to run it and once it was announced that I could walk it and still get double credit towards my 9+1 for NYC 2011, I decided it was time. My trainer said it would be a good test for how well my fracture was healing, so I could walk it. It sucked to not be able to run it, but I was going out of my mind and I had to participate somehow, so as much as I hated having to do it, I signed up as a walker. Nixta wanted to definitely run it and I felt a little silly walking on my own, but luckily it was pretty easy to find some friends who were down with walking 4 miles for a great cause, so I'd have some company at least. I picked up our numbers and D-tags a few days before, and ran into my friend Mark at the clubhouse, which was nice. We talked about my stupid injury and his awesome new job and how we always seem to pick the races with the lamest t-shirts and I started to feel a little of the old pre race day excitement coming on. The night before I set out all of my gear like I normally would, got to bed early like I normally would, and looked forward to being in CP again after a LONG absence. 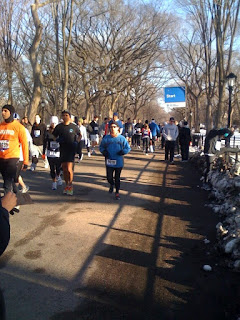 I love race day. I love the vibe, I love the ritual of getting ready, I love running into friends as we head to the corrals. It was definitely cold, but it was clear and sunny and I was just happy to be there. I went waaaaaaay back past the runners and in the last corral, I saw my friends and we found a spot with the rest of the race walkers. I was still feeling a little down about not being able to run, but my buddy Jeff just wasn't having it and was a champ at keeping me in a positive mindset. I told him that I was tempted to push it and make sure I came in FIRST amongst all of the walkers and he said wouldn't it be better to compete for dead last? Yeah. Yeah! Why push myself and think about what I can't do (and possibly re-injure myself in a slow JOG) and just have fun with what I can do? So that was it. Me, Jeff and Jeff's lady friend started stretching, warming up and trash talking about who was going to push who across the finish line first.

We were SO far back. So far back, we couldn't hear the opening speeches and it took about 20 minutes to cross the start line after the gun went off. It was the first start that I wasn't worried about starting my watch as I crossed the mat or looking for a clear line to run in, so it was nice to be able to see everything else that goes on during a Central Park race. There were bands! There were people cheering and waving! There were these Haitian guys dancing on stilts! It was a beautiful day in the park. 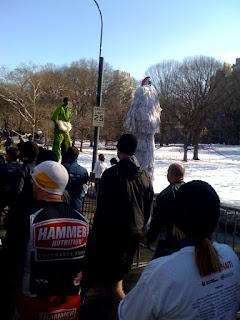 Once we crossed the start mat, I felt the urge to start running. I picked up the pace and must have looked like I was about to make a break for it, but Jeff reminded me that I wasn't going to come in last if I didn't get over that urge to run, so I slowed down. I can't let that guy beat me to last place! We settled into a brisk walk, and enjoyed the scenery as we climbed Cat Hill. My injury felt fine, I even felt like I was waking up some long dormant muscles, and I was kind of breaking a sweat, so I was pretty happy. And then...I heard the course marshalls.

I can't complain too much. The course marshalls are mostly runners like me, looking to fulfill their volunteer requirement in the 9+1. They are there to make sure you stay within the cones on the course, and if anyone goes down, to help get them to the med tent. If they'd like to offer encouragement, that's cool, but after hearing what a lot of them were saying, I'd like to give a little list of things that will help, and things that will get you punched.

-Do remind runners to run in the lanes. But, it gets crowded and sometimes runners need to pass. Remind them to pass quickly, but get back in the course lanes as soon as they can. Know the difference between passing and running the race outside the cones and do your best to encourage quick execution of the former and keep the latter to a minimum.

-Do have some enthusiasm. This shouldn't be a chore, you are supporting your fellow runners! Smiles, clapping, cowbells, whoops and high fives are awesome. Runners appreciate it and seriously, its fun.

-Don't be a jerk about the lane thing. You are essentially a race day hall monitor, not the NYPD. Don't get nasty, don't yell and don't threaten bodily harm (I've heard people do this at more than one race). Its just a RACE. If someone is blatantly being a running jerk, get their bib number, remember to talk to the race coordinator afterwards and otherwise, LET IT GO.

-Don't hang around with your bros, clearly not wanting there. Its hard to crank out those last miles when a group of people are staring you down with their hate faces on.

-Don't tell people 'you're almost there' when they aren't. You should only say that when they are actually ALMOST there. Like within sight of the finish line. Acknowledge that its hard, tell them to keep going, give an accurate distance if you can, but don't say 'you're almost there' to someone who is burning their lungs out and trying desperately to find the will to keep going. A short distance to you can be an eternity to them. Respect the pain.

-Don't tell people to 'pick up the pace', 'work harder for that PR' and CERTAINLY don't tell people that 'if they aren't going to run faster, they have to give you a smile'. You don't know anything other than they are making the effort, so acknowledge it and let them decide how hard they need to work. And any woman who has ever been harassed by a stranger on the street to 'smile' should know how infuriating this is and not participate in that kind of nonsense. See above for good things to say for encouragement.


I was feeling good around mile 2.5, and it was getting a little cold, so I decided to try a little jog to see how it felt. It was weird to be running again! I had done a few intervals on the treadmill, but I had forgotten how it felt to run on the road, and..it was weird! I felt fine, none of the old 'twinges' from the fracture, but I didn't want to push it, so after about 2 minutes, we went back down to a walk.

At about mile three, Nixta (who had long since finished) jogged back to find us, and we all walked the last mile together. I was having so much fun laughing and joking with everyone, I didn't notice when Jeff took two steps back and...was last over the finish line. DAMN that guy! 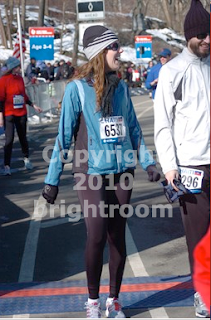 Me and Nixta, realizing we had just been cheated out of our last place glory

Oh well, a second place finish isn't too bad for my first time back on the race course and its helped me through these last few weeks of non running. I say last few weeks because....I see my new sports med doc tomorrow for new X rays an an evaluation of what the next steps will be. I'm really hoping that it was indeed my 'last few weeks' in siberia. I'm feeling good, feeling positive. Its coming up on about 8 months of no running and close attention to recovery, cross training and strength training. Lets hope its going to pay off soon....
Posted by DMC at 9:49 PM