I've been talking about this injury for a long time. I've been thinking about it for even longer. When you are so focused on a goal, and when the journey to that goal is a big part of your emotional and physical well-being, detours can be frustrating, and road blocks can be downright devastating.

Going through my list of symptoms, I have consulted my coaches, my trainer, physical therapists, and my GP for ideas of what might be the culprit. To a man, they all said 'it doesn't SOUND like a fracture'. My GP thought it was just muscles that would not relax, and the spasming was due to a pinched sciatic nerve. She gave me some muscle relaxers, and told me to get an xray 'just in case'. I got my xray back with a note that there was no visible fracture, but some 'bone thickening' was present in the left inferior pubic ramus. It was time to pull out the big guns and go for the MRI. 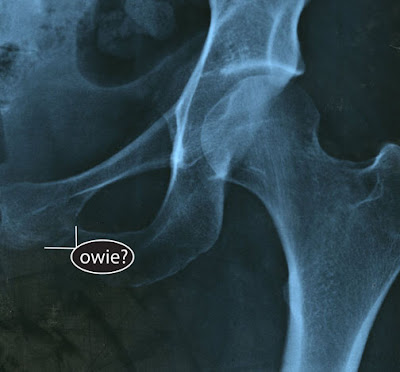 My insurance is shit. My MRI would not be covered unless I waited for my insurance year to roll over (3 week wait). This was agonizing, but considering I couldn't run without pain anyway, I decided to wait.

The MRI took some doing to set up. My orthopedic surgeon requested I get it done at Lennox Hill (2 MRI's at a cost of over $3200), but after doing some research, I discovered that injury required only ONE MRI, and I could get that done for less than half the cost of a single done in Manhattan if I left the city. We decided to get it done in Bay Shore and catch the ferry to Fire Island for the day after the test. It was kind of fun; we had a road trip, we took the ding dong on her first trip to the beach, and I got to pretend I was having a 2001: A Space Odyessy moment (seriously, the room was dimly lit with purple light, the machine was white and sounded like a space ship. I got a little excited. It felt like I was seriously in the future!).

A week later, I go to my ortho, who comes breezing into the room with the news; its a fracture. I asked him how big it was, at what stage it was, and when I could start rehabilitation. He blew off every question with 'stop running'. He gave me some half baked ideas that running is bad for your bones and joints (wrong-running has been proven to increase bone density and protect the joints in healthy runners), people past their twenties should not be running long distances (again, wrong-distance runners come into their prime in their mid thirties), and that past the age of 50, you don't see many runners at all (yet again, so so wrong- one of my team coaches is still racing and setting records in his 70s, and I routinely get PASSED in races by many many Olds). He finally got down to it and said that he just personally does NOT LIKE RUNNING. Which is fine, but that's like...your opinion, dude. Ok, here's mine:

Seriously, I'm getting tired of non runners blithely telling runners how horrible the sport is. It is NOT anymore injury prone than any other sport. Many sports have repetitive stress injuries (swimming, tennis, soccer, gymnastics, dance, baseball...), and like any other sport, you train as well as you can to avoid them, and honestly, I think many people use 'possible injury' as an excuse to not do it because...running is damn hard.

I said all of this in my head, because why argue with this guy? He just doesn't like running. It won't change the fact that I have a fracture. At this point, I just need to know how to fix it. I asked what I could do for rehab while I was taking a break from running, and he said 'Look, I don't have a book here that tells me how to fix it, I can just tell you that it is broken.' Well, at least he acknowledged his limitations. I said thanks, and called my Physio, who told me to lay off of everything for 6 weeks, then only water running, the elliptical machine and Pilates, adding weight training as I felt better. No marathon this year, and don't even think about running until January at the earliest.

This is incredibly disappointing, but at least I had been thinking about it for a while, and was prepared for this outcome. Those first few weeks of scrambling were so mentally taxing. It had taken over my life, and I was miserable. I wasn't seeing my friends, I wasn't meditating, and I was refusing to see anything beyond the goal of 'Marathon'. I took a step back and remembered a great piece of advice I got when I first started exploring meditation and Buddhism: 'Your desires are like a thorny rose. Beautiful, but if those thorns hurt to hold on to so tightly-ease up'. So I did, and I felt better. That's also about when one of my coaches took me aside and told me that I had the ability to do this and do it very well if I just relaxed, let it heal, and started over again. He invited me to start training with his team, and defer my marathon entry to next year. So that's what I am doing. My fund raising will carry over, and I will run a better race that I could have this year.

So, please keep reading, I still have a lot to say, and I will be detailing my comeback and all that I've learned from it. If you have donated, thank you again, and know that it will still be put to good use for my guaranteed marathon entry next year. If you HAVEN'T donated, please consider it. I'm not done yet, and these kids still need some sports in their lives.

I will leave you with the 3D part of the diagnosis. I went to see The Final Destination this week (sometimes I love a campy slasher film, and I especially love it in 3D), and the title credits were not only awesome (and in 3D), but the xray theme was appropriate for today's post. Warning: Lots of very graphic owies. Enjoy!