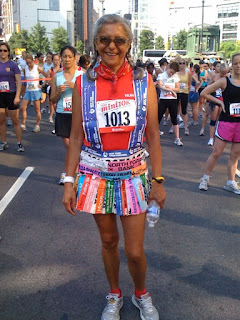 Lookit her skirt! She made it out of all her old race bibs! She gave me a curtsy, but I wasn't quick enough to catch it.


This was my first race after the Brooklyn Half. I was slammed at work (when am I not? Seriously, I'm starting to get bitter about this), and didn't have time to train, so I went into it thinking I'd take it easy, treat it as a training run. But noooooo.....

I chose this race based on my training schedule, and though I knew it was a woman's only event, but I didn't realize that it was kind of a big deal. I am usually slotted in the 4th or 5th corral, but due to the absence of men, we all moved up in the time ranks, and I was placed in the 2nd corral. Woo hoo! 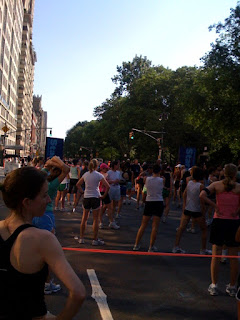 Its a beautiful day for the Lady 10k

I could see the starting line, I could see the elite runners as they were introduced, and I could see the podium where Mary Wittenberg gave quite a moving speech about the history of the race and woman's distance running in general. We all got amped up on girl power, the national anthem was sung, the horn sounded, and we took off up Central Park West.

I am a solid middle of the pack runner. I never sneak into the faster corrals, and I usually finish towards the front of my pace group, so I'm not used to being passed by too many runners at the beginning. Sure, there are the usual few runners who blow out too fast, and then you see walking just after the first mile, but it is typically so crowded in that first mile, unless you run on the outside edge, there isn't a whole lot of high speed passing going on. Not so this time. I crossed the start line maybe 5 seconds after the elites, and then the course opened up to cover half the width of CPW. Amazing! I could see the lead car! I was running with the fast girls! I was getting PASSED on all sides like crazy! I kept my standard first mile pace until a dozen more runners passed me, and then I turned off my brain and RAN. Mistake. I could give the blow by blow, but just check out my ridiculous splits:

I managed to staunch the bleeding of positive splits in mile 6, but gawd almighty, that was a good lesson in how not to run a race. The heat really started to bother us all once we came off the Harlem Hills, and despite the water/Gatorade tables and the misting stations, we were just getting too hot. I learned my lesson from the Brooklyn Half, took fluids at all the stations, and...I walked. For the first time in a race, I walked. It was just too hot and I had blown out too fast. I walked the fluid station at mile 3, and then again in mile 4. I pulled it together and finished the race as strong as I could, and when I compared my time with my PR at the Healthy Kidney, I was only 22 seconds slower. How infuriating/frustrating! That race felt MUCH harder than it should have and I could have ran a PR had I just slowed down the first two miles and then laid down a couple of fast miles at the end. After we crossed the finish line, the girl next to me turned and said; 'Was it me or was that BRUTAL?' It was certainly not just you, lady. When I was told before the race that we got a pink carnation and a medal at the end, I turned my nose up at the idea. After the race...not such a bad idea, I'll take both, please!

So...lesson learned, and I'm looking forward to working on my pacing with the TFK coaches, and on the 18th will be running my first team race!
Posted by DMC at 3:50 PM