This morning was my first run in a week, after sidelining myself to work on some tight hamstrings. Not only was it my first run, but because I was given another death march to complete at work, it was my first workout since Tuesday. I don't like missing my workouts, and I'm coming to a point where I just CAN'T drop my training as I have been for the past three weeks, so I'm going to have to talk with the boss lady and find a way to make this work. I'm trying to compromise by working out in the morning when I can, but when I work until 9pm and don't have any time with Nixta and Nico-The Ding Dong Dog, it wears me down quick. Hopefully we won't have too many more of these, but who knows? Anyway, today was my first run in a week, and I was looking forward to it!

Today we left Central Park, and met in Riverside Park at 72nd St. I have never run here, so was looking forward to the change of scenery. After our warm up, we split into pace groups. This time the pace groups were based on time, rather than our previous 'beginner/intermediate/experienced' groups. I joined my friends Paige and Mark in the 8:45-9:15mi group for the 7 mile run. 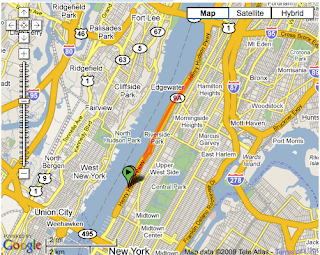 Coach Glen started us off at the low end of our target pace-a 9:17mi pace that was a great warm up. Warm up mile over, Glen kept us between an 8:45/8:15 pace for the rest of the 7 mile run. Except it wasn't 7 miles, it was 8. We missed a left turn in the early miles, and added about a mile total onto our run. We got to the turn around at 4 miles even, gulped down some water, and headed back.

It was a beautiful day today. 82 degrees, sunny...wonderful weather for a morning in the park. Unless you are running! I was starting to feel the heat at mile 5. It drained the energy from my legs, and made that small voice inside of me that says 'just slow down and walk a bit' grow louder with each passing minute. I don't like to walk during my runs. Training or racing, I think walking is a signal that you planned poorly. You ran out too fast, you are not yet strong enough for the distance, you are dehydrated, you didn't get enough calories in you before the run...something is wrong and something better be wrong, because walking because you are a little tired is just cheating. I did a body scan (hydrated? body temp OK? hamstring OK?) and decided nothing was actually bothering me enough to stop running, so I kept on. It was all in my head, and while the heat WAS uncomfortable, the great thing about Everything is...it all ends eventually. I wasn't going to be this uncomfortable for longer than a few more miles, so just keep the pace and it would get better.

But I needed something to shut that voice up! Sometimes I think about music, sometimes I think of design work, and sometimes I get really abstract and pretend I'm in a video game (100 points for passing that tree! 500 points for passing those runners in the distance! Re-up my life force when I hydrate or take a gel!). Nothing was doing it for me. As we ran, we would encounter other groups of runners and bikers, and we'd try to make room for everyone to share the road. I remembered being told by one of the coaches that a group of runners can become a gang of runners if we aren't mindful of others, and the word gang got stuck in my head. We were a gang of runners pounding our way downtown through Riverside Park...OMG, we were The Warriors! And we were being chased through the park by The Baseball Furies!

Riverside Park Belongs to the Furies

I can't let The Furies catch up by dragging the pace down, so I picked it up a bit, and ran it as hard as I could all the way back! Some of the group peeled off and ran 8:00s to the finish, but I kept it at 8:30, and led my fellow Warriors back to safety.

It is a bit silly, and some people have given me strange looks when I tell them about how I get through difficult runs, but for three weeks I've been running less than half the mileage I should be, and I did manage to stay at or above pace in the longest training run I've done since the Brooklyn Half. So yes, it is indeed silly, but it works!