I will start posting all of my races from now on, but I also wanted to get a few of the old ones up too, so I present you with my first Retro Race Report!

This was it! This was the day I'd been training since January for! The Brooklyn Half marathon! Many people claim this as their favorite leg of the 5 Borough Grand Prix, as the course is relatively flat and straight, so you get fast times. The time of year is usually still very mild, and this year the course was reversed, and the race ended in Coney Island rather than after 2 loops of Prospect park. I was tapered, I was hydrated, I was good to go, so at 6am, I got on the Q train and headed down to the park!

I arrived pretty early, so I found a quiet spot, did my stretching, and watched everything being set up. Hit the Port-O-Sans one last time, filled my fuel belt (aka the Batman Utility belt, aka the Bat Belt) and headed over to my corral. It was a great morning, and after a quick 'Howyadoin fuhggetaboudit' from borough president Marty Markowitz, we were off! 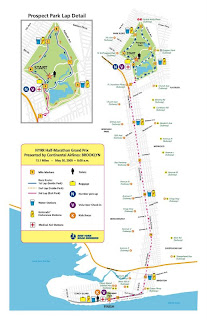 The first 6 miles were in Prospect park. We ran two loops, with the faster runners to the right on the second loop. I trained this part of the course a few times leading up to the race, so I knew what to expect - hills. Despite all the warnings I had received, they actually weren't that bad. The first lap I ran slow as a warm up, and we got to see the elites float by as they finished their mile six to our mile three. After a round of applause and some whoots, we realized they were halfway done with their race, and we still had 9 miles to go, so we collectively decided to shut it and get back to work. Second lap of hills weren't no thing either, and I was wondering if I was really really prepared or just running a little slow. Was probably a little of both, but it was my first time racing that distance and I didn't want to chance blowing it by pushing to hard, so I kept it at an easy 9 as I swung out the park and onto Ocean Parkway.

And then the heat. It smelled like fumes, the sun was making everything look a little overexposed, and it was a straight course of nothing but hot pavement as far as the eye could see. It was nothing like my usual training runs in one of the city's many parks. After a few we got off the expressway and onto the parkway proper, there was indeed a nice park-y sort of median to the left, so I focused on that as I ran. I started hitting the bat belt a little harder outside of the park and took a gel. Nixta had agreed to be at mile nine to cheer me on, so I texted him at the eight marker that I was on my way.

The area is actually quite residential, so there were many occasions where the locals would Frogger it across the street. Coming up on mile 9, I saw Nixta, gazing intently into the distance-presumably searching for me-with a look of concern on his face. He kept looking as I ran past, and only got a (half) picture of me because I screamed his name on my way into the distance! Later he told me that he was watching a little old lady push another little old lady in a wheelchair across the street and he was worried they wouldn't make it without getting plowed into by a pack of runners. Oh, and there was no cheering, just an 'oh, its you' before the camera was fished out of his pocket. But I was happy he hauled it all the way down to Brooklyn at 9am to watch me race, so yay Nixta!

Miles 9-11 were thirsty and boring. I do a lot of training runs along the east river where the water stops are sporadic at best, so I wear the bat belt for water and to carry my keys and phone. I decided to wear it for the half because in my short racing history, I've developed a dislike for the water stations. They often start them too early in the race and the congestion around them bugs me, so I'd rather just not bother. Besides, I had a phone and some gels to carry, so it was nice to have. In theory. It kept riding up my waist, and wanted to live right under my chest, and later in the race I realized that having water on hand to sip at is great if you supplement it with full cups at the stations. I stopped at no stations, and so was starting to get tired. 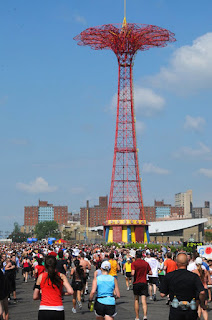 Mile 12 is when I realized I would need to pick it up if I was going to meet my sub-2 hour finish goal, so I put my last into it as we finished the parkway and ran up onto the boardwalk. The last half mile seemed to stretch on forever and when I finally crossed the finish line, I had made my goal by 5 seconds.

Post race I met up with Nixta and our friend Andrew, and had the best beer of my life at Peggy Oneill's sports bar as we waited for the official results to be posted. Post post race, I told everyone we came across that I had just finished the half marathon, and I'm sure I was still beaming with pride as I passed out on the couch for a long afternoon rest.

I was proud of this one, I think it was a great first. I learned an easy lesson about making sure to stay hydrated, and I will definitely be hitting the water stops more in my races over the summer. I can also definitely push this race harder, so I'm looking forward to faster times coming my way!