Namaste, Bitches! Now Drop and Give me 50.

So my two week death march at work, coupled with too much focus on running and not enough on recovery, has resulted in tight, sore hamstrings. I wanted to race the Father's Day 5 miler last Sunday, but after talking to the coaches in practice on Saturday, decided to skip it. Sore hamstrings are a precursor to pulled hamstrings, so we decided it was better to not race, and focus on cross training and gentle stretching this week. So as the second half of my workout double header (did an hour of weights in the morning with my trainer), for the first time in two months, I hit yoga class last night.

I have never experienced hell week in the US military's basic training. I have heard of it, I have seen it depicted in film. It looks like it hurts and
you do a lot of push ups. Hey, that was my yoga class! 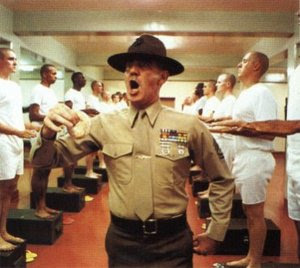 My Yoga Class in Mountain Pose with Manicure Mudra

Chaturanga: Yoga Push Up. Done from a plank position, hands close to mid-ribcage, slowly and with control, lower down with elbows facing back.

My usual yoga class consists of several rounds of sun salutations (with chaturangas) at the beginning, for anywhere from 20 min to half an hour or so. Then we move on to standing poses, then to sitting. Not this class. We did chaturangas in between EVERY pose. I usually have about 10-15 good chaturangas in me. I blew through those in 15 minutes, and then...I had to resort to the yoga Girl Push Ups.

Oh, the shame! The pain! I wanted to die, and this smiling hippie bastard yoga teacher was standing right next to me to make sure I didn't cop out and rest in child's pose for the 3rd time in a row. I was tired and weak, and when the time came to do full wheel pose, I could barely manage three solid bridges.

It was my karma coming back to get me for skipping out on yoga class for the past two months. Sometimes karma is indeed a bitch.

I did get a great workout in, and the instructor (who is actually a very nice guy, but during class I SERIOUSLY disliked him) did help me super stretch out my hamstrings and hip flexors afterward. The fact that I intensely hated his class is evidence that I need to keep going, so I am grudgingly checking the schedule for the next time he is teaching, though I can't guarantee that I won't be silently cursing him the whole session.

Becky, one of my fellow TFK teammates is a fantastic yoga teacher, and during a group yoga stretch after one of our runs, reminded us to smile, because everyone always looks so serious during yoga. It should be fun, and its easy to take too seriously, so check out these two yoga clips!


Oh Ogden. You may be a yoga clown, but your crow pose is still better than mine!


Everyone knows at least one of these guys. I try to ignore them until after class when I'm so relaxed, NOTHING they say can make me want to punch them in the mouth.
Posted by DMC at 9:24 PM